In 2001 Ivor had achieved what he’d set out to achieve with his company Woodland Animations and it was time to call it a day. He’d been able to generate more freedom in his work especially with the likes of Charlie Chalk, his only truly original show. He’d also created Bertha, Gran and not one but two series of Postman Pat. This doesn’t include all the Pat spin-offs he created along with some great work for Ronald Searle.

It was the end of an era and time to sell up and move on. The company was sold to Entertainment Rights who took everything in the buy-out, from tapes all the way through to the puppets. As it currently stands there is no knowledge of where the puppets went for Bertha, Gran and Charlie Chalk despite continued digging by Ivor’s wife Josiane. This is such a shame but we will not give up hope in the fact that they are out there somewhere.

The silver lining to this dark cloud is that many of the sets, props and puppets of Postman Pat were indeed kept and stored with the care and attention they deserved. None more so than everyones favourite cat, Jess. In 2003 Cosgrove Hall revamped Pat and his friends for a brand new series. They were careful to create a show that exactly mirrored what Ivor had achieved and this meant creating new versions of the puppets in their exact likenesses.

Puppet creation was all down to Manchester based puppet makers Mackinnon and Saunders. They were lucky enough to gain access to Ivor’s originals and use them as a guide when creating the new armatures. However when it came to making Jess it proved difficult at face value to tell exactly how she was made. With a deep respect for Ivor’s work and puppets, it was not an option to strip Jess down to find out.

It was co-owner Peter Saunders who then had a brain wave. He had a friend who worked at the Royal Infirmary, so he took Jess down there and got her x-rayed. Resulting in the original ‘black and white cat’ you see below: 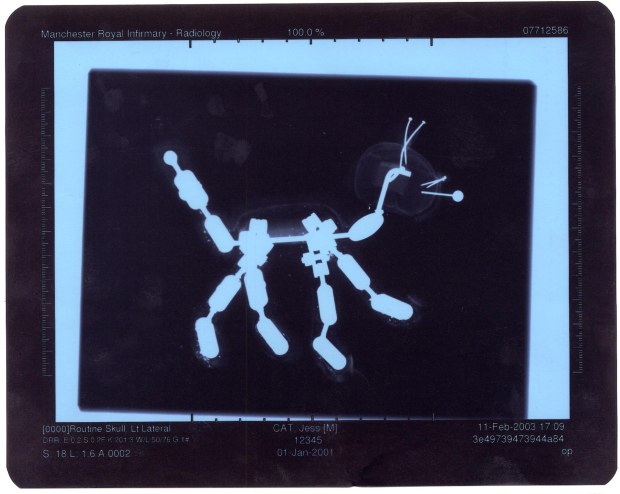 As you can see from the above it worked a treat and the x-ray showed up all of Jess’s inner workings even down to her wire whiskers and bendable ears. It’s so nice to see that the stop-motion community is so understanding when it comes to others work and also great for all us fans to actually be able to see how Ivor’s puppets were made.

The model is most likely made for hand-made ball and socket joints joined together with brass rods. The lumpy bits are more than likely foam or similar to help pad out the more muscular areas. Wire was used for the ears and whiskers so that Jess’s features could gain more expression. Also note the pin and pin head used for Jess’s nose! In early 1979 Ivor Wood was coming to the end of the lengthy pre-production and concept design process of Postman Pat. Scripts were honed and budgets were agreed. It was now Ivor’s job, at his newly formed Woodland Animations, to create the world and characters that would inhabit and bring to life John Cunliffe’s stories.

Whilst looking through the Written Archives at the BBC I stumbled across this ingenious and remarkable letter that Ivor had written to, the then Executive Producer for Childrens BBC, Cynthia Felgate. Whilst I am unsure as to what the preceding letter had outlined, it appears to have mentioned the fact that within the scripts there was a lot of action regarding roaming cattle and wildlife. This is something Ivor wasn’t so keen to encourage as he details in his reply:

My first reaction was one of complete misery; How on earth does one animate herds of cows, ducks playing on water, herons and hawks flying, lambs frisking in a field, not to mention the hens…

Having read and reread the material, I laid the project to rest and, whilst going about my business, gave the matter much thought.

And much thought he did indeed give it. Ever the optimist and always willing to create the best possible solution to problems, Ivor came up with some very clever ideas on how to overcome this horrendous obstacle:

Mountains, valleys, lakes, woods and farmland: If the landscape is a wide extensive and extensible set, the human figures will have to be rather small. This in puppet form makes rather unmanageable or stiff animation, not to mention coping with the cat who will be minute.

If you wish to maintain this “rolling hills into the distance” atmosphere and keep characters to a manageable size, a little cheating will be necessary. I suggest that we use either very simple one tone segments that fit like a theatre set…

Now this is pretty much what was created in the show we know and love. A simple yet effective use of forced perspective, something film makers and set designers have been using for years and years. However Ivor doesn’t give up there and goes onto outline another idea….

Or maybe a back projection for the far distance with the foreground in true decor style. 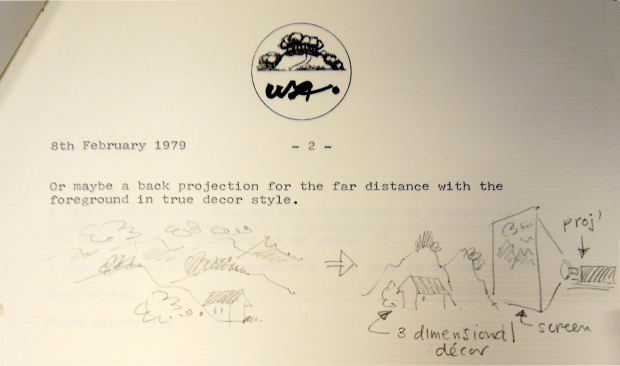 Now this is a bit ‘out there’ but nothing compared to the other idea he had to alleviate the need for flocks and herds of animals:

No amount of animation could possibly compete with nature, therefore would it be possible to introduce ‘Motorised Photography’ – the still camera that can take up to 5 frames per second (with a special magazine: 250 frames before reloading).

These running sequences could then be put onto 16m/m film, each photo linked by quick or slow cross-dissolves, giving a motion effect with maybe a freeze frame start and finish to underline the switch from animation – real photography – back to animation.

Note: Motorised Photography would be less expensive than a camera crew using 16m/m. But there is a snag – ie how long do you wait for the ducks or the heron?

…Amazing! It’s certainly creative but wow what a headache if the BBC had said yes. Drawbacks that spring to my mind are endless, adding a further stop-motion element to an animators schedule that relied on them not only animating the puppets but also making sure the live action footage was being held at the right frame each time. The ability of photographing animals doing exactly the right thing and making sure all perspectives etc were correct…the list goes on. If this was put into practice it would turn into the puppet animation working around the ‘live action’ due to that fact that animals aren’t always going to do exactly what you tell them. This could have led to long pauses and stilted action.

It certainly was ambitious but something tells me that Ivor’s complex wording and subtle negativities were all part of the plan to put the BBC off doing anything over complicated. I’ll leave you with Ivor’s last paragraph and see what you think.

I really think that this project is in need of a style to express itself without giving nightmares to the animator. (Is this wishful thinking on my behalf?).

All quotes and ‘back projector illustration’ are from a letter written by Ivor Wood to Cynthia Felgate at Children’s BBC. The letter is dated 8th February 1979 and permission has been granted to the author by the BBC Written Archives.