Big thanks to everyone whose been in touch over the last few weeks it’s been great fun looking through all your amazing and insightful comments. The information that you put forward was so good that I thought it deserved a post of it’s own. So in no particular order here are those intriguing little tit-bits.

Firstly thanks to Nick a few weeks ago for discovering where the second Paddington Bear puppet is and most interestingly where it’s been. 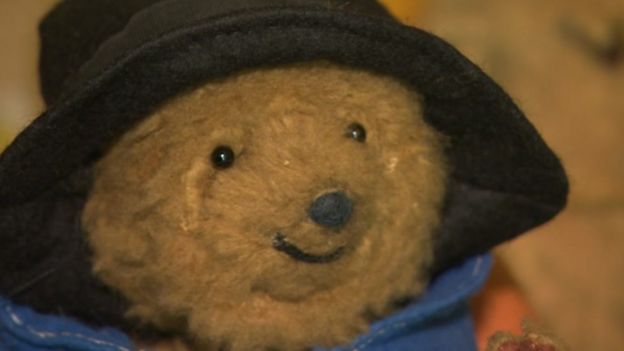 Great blog and a very interesting read! I found this article http://www.bbc.co.uk/news/uk-england-york-north-yorkshire-36372330 which mentions Gyles (Brandreth) had an original Paddington Bear too. I have also found the the Museum of London had Paddington on display in the last couple of years and also the Polka Theatre in Wimbledon….did you know about these? Looking forward to more updates!

A great find and it’s really nice to know that both bears are now accounted for. I know that Barry Macey (Paddington animator) had one of the puppets in his shed for a long while as he used to take photos of the puppet for magazines and books. Will have to enquire as to what one that was.

Next up, with a surprise I wasn’t expecting, is Gareth Jones who has spotted another cross-over in Ivor’s work. Would you believe Charlie Chalks Merrytwit Island actually appears in Postman Pat…

Looking at that, remember Postman Pat Takes Flight and the film that was on it has someone on a hot air balloon and it looked like it was floating over trader jones store do you think there’s a connection to this character?

At first, I’ll admit, I was sceptical but take a look for yourself above. The Major is featured showing a film of his travels and he indeed does take a hot air balloon ride over Merrtwit and Trader Jones cabin. A great find and it makes total sense as Series 2 of Pat was created after Charlie Chalk so the sets would have certainly been knocking around. It is rumoured that Ivor didn’t much want to produce the 2nd series of Pat as he felt it had run it’s course. However placing a Charlie Chalk reference within it must have raised his spirits.

In addition to this point, Jay from The Herbs Homestead (a superb blog all on The Herbs www.theherbs.homestead.com) cleverly points out in reference to the article on the lost Charlie Chalk character (Max the Big Game Hunter)

Maybe the similarities with an earlier character (Max the Big Game Hunter) were just too striking ?
“Hunter…..wouldn’t hurt a fly……always in trouble with Captain Mildred”
Just replace Captain Mildred with Lady Rosemary and you’ve effectively got Sir Basil from The Herbs.

Again thanks so much for all these great finds and information. It’s a pleasure to do this blog and with you all contributing it makes it all the more satisfying. Hopefully they’ll be some more great finds for you in the next post.

I’d also like to say a big thanks to Gill who has kindly sent this months Waitrose magazine to me as it has an interview with Sir Michael Bond, author of Paddington and The Herbs. I’ll makes sure to give it a read!