In the late 60s Keith Chatfield started to create the wonderful world of The Hattytown Tales. Initially they were just stories for his son but would soon become a successful TV show of three series and writing and narrating them all himself. Together with the ingenious designs of Ivor Wood, who would animate the series along with Rory Fellowes and the ever focused Graham Clutterbuck at FilmFair it would go onto to be a great success. I spoke to Keith about this exciting time in his life, so i’ll leave most of the talking to him.

Keith Chatfield and The Hattytown Tales

It started off as me writing bedtime stories for my son who was 6 years old. I was in marketing at the time and a guy I did a lot of work with said “this could be commercial”. With my own ideas I was never arrogant enough to think this could be commercial! But he took the idea to the BBC and Thames Television and they were both interested. It was Thames who came up with an offer first so we went with them.

I first met Ivor in Paris (FilmFair) when we flew over there with this concept of an idea. He was an incredible man whose dedication to this technique (stop motion) suddenly transformed a concept into a complete and utter reality. It was like walking into a complete township of Hattytown, a miracle really with cameras set up recording the movement of one arm and a leg just a fraction and 25 frames later you had a second of animation. Absolute dedication.

I remember Ivor himself being a very gentle and dedicated man, I suppose underneath he was quite intense but overall quite a quiet man. To me he was this god who turned concepts into reality.

As the productions moved on and they entered into the second series Keith candidly talked about how they were all improving, him with his scripting and voiceover, Ivor and Rory’s animation, pretty much the production process as a whole. Typically, even though the going was good, Graham and Ivor were still looking to push the boundaries:

The interesting development with Filmfair and Ivor was they were originally 12 minutes episodes, but after the first series of 24 they wanted to sell it to the continent which were normally 6 minutes. So they asked, could I devise stories that could be cut in half so they could be shown on British TV at 12 minutes and cut in half and given a opening jingle again to sell abroad. They never did sell abroad but we did produce 12 programmes that were interchangeable from a 12 to a 6 minute.

One thing I do remember clearly was I under wrote initially. Ivor had to add a lot of movement to fill in, unfortunately making the initial programmes very slow. Ivor never came back to me and said you could do with a bit more script here, he just filled it with his own talents. Which I think many of the younger children quite liked to see Sancho and Carrots kicking about in-between the trees. 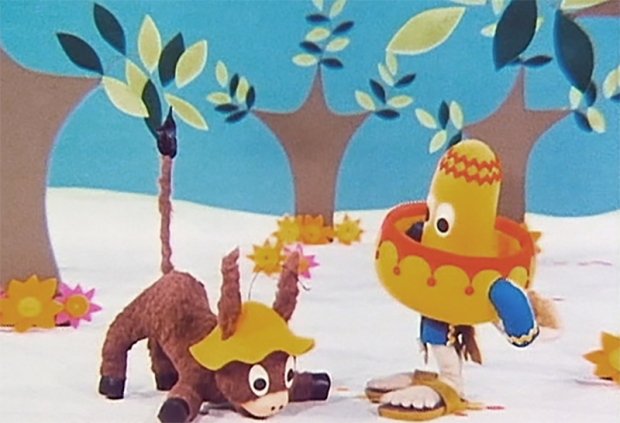 The Hattytown Tales – Sancho and Carrots the Donkey

It’s interesting to learn that Ivor was still keen to shorten the programmes and try to make them as marketable as possible. Something he, and Serge Danot on The Magic Roundabout, had strived so hard to do in those early days.

I’ve got the original model of Sancho that was made where the eyes were in the brim of the hat. But when it came to make the actual physical model the problems became  the eyes looking out of the brim. It just didn’t work like it had done with the model. We had to extend the dome of the hat like you see it on the show.

At the end when it was all over they didn’t know what to do with all the hats and so I said I’ll take them. For years and years I had them in my loft but I didn’t put them in plastic sacks and the moths had a go at them. It was a tragedy really and eventually I donated them to Central St Martins in London for a guy there to recondition them. Sadly he never got round to it and I don’t what they did with them in the end.

The mystery continues. Looks like there is still a bit of digging to be done on the subject and those elusive puppets. Many thanks to Keith for this interview and his support for the blog. After The Hattytown Tales Keith went onto write other stories including his most successful set to date, those of the little panda Issi Noho. You can find out more about Keith on his website: http://www.issinoho.net/

First off, apologies for the week delay in getting a post out to you all. It’s been a busy time over the last month both with the studio and being  in the process of buying a house, so the stress just piles on! Hopefully back to it now with this little treat and and introduction to some new posts. 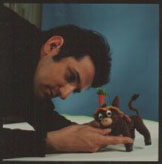 It’s about time we ventured into the world of some of Ivor Wood’s, dare I say, lesser known works. In the late 1960’s, and as The Herbs first series was coming to an end, Graham Clutterbuck at FilmFair bought to Ivor’s attention a little set of stories called The Hattytown Tales. Written by Keith Chatfield they were originally stories meant for his children but one of his friends noticed how good they were and an bigger idea was born.

The surreal world in which The Hattytown Tales is set, is a world made up of anthropomorphic hats (and a Donkey) led by a Mexican hat called Sancho. The characters are each made of hats that correspond to their personalities and jobs. For example Mr Bun the Baker is a chefs hat and also lives in, you’ve guessed it, a chef’s hat! 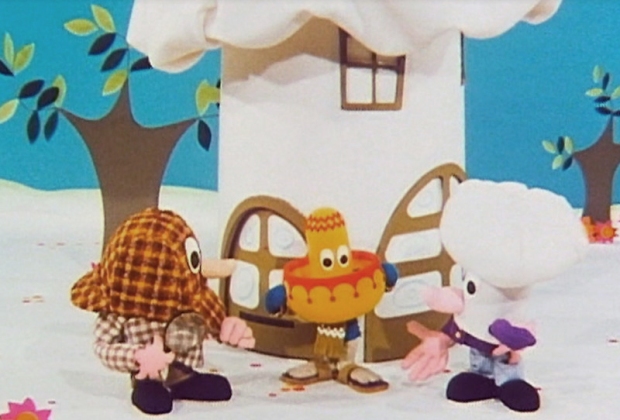 The Hattytown Tales – Simon the Detective, Sancho and Mr Bun the Baker

This was Ivor’s third production and we can clearly see influences from his previous shows, in particular The Magic Roundabout. The sets (as you’ll see above) are very simple, using a white floor, blue sky and very stylised trees. Those three characteristics jump out immediately in relation to The Magic Roundabout and one can only guess that the budget was slightly more constrained compared to The Herbs with it’s elaborate set pieces. The show regardless of this  is a true testament to Ivor’s ingenuity and design. The characters feel rich and playful and full of heart. After all it couldn’t have been easy creating characters from hats.

Ivor went on to animate the first series solo before Film Fair hopped over the channel to set up in London. On his arrival Ivor looked to a young animator by the name of Rory Fellowes to take over the duty of animating The Hattytown Tales. It was Rory’s first real animation job and one that he learned a lot from, both practically and from Ivor. Amazingly we have a photographs of Ivor animating Hattytown in the lates 60s (above). It’s very small but it shows clearly Ivor’s great concentration and attention to detail as he adds a little movement to Carrots the Donkeys’ leg before a photograph is recorded.

I am lucky enough to have had interviews with both Keith Chatfield and Rory Fellowes that I’ll be bringing you over the coming weeks. They are both thoroughly interesting people and give a real insight into Ivor’s process and the work that was done on The Hattytown Tales, so stay tuned!