Amazing news this week straight from similar Ivor Wood researcher and admirer Joseph Wallace as he gets set to curate a retrospective of some of Ivor’s best work at this years Bristol Festival of Puppetry.

This Saturday 29th August as part of the Bristol Festival of Puppetry, Ivor Wood’s work will be given a full retrospective in an 80 minute screening of some his most famous and beloved work. ‘Ivor Wood: An Animated Celebration’ is the brain child of Joseph Wallace who is one of the festival curators. His background is varied but largely focused on puppetry and acting and has always had a love for Ivor’s work and feels that it is much under appreciated in the wider animation and puppetry world.

Having met with Joseph on occasion he expresses great passion and dedication to putting Ivor’s work centre stage. He has wrangled lots of permissions and taken a long road in order to show this retrospective and by the sounds of the bill it feels like a really full and rich collection of what Ivor produced within his career.

Paddington: Please Look After This Bear (1975)

Including these great episodes I’m led to believe that there will be some special editions nestled in amongst them, including some rare adverts that Ivor was apart of.

I can’t wait to watch all these great films on the big screen and hopefully watch adults fall in love once more with characters such as Paddington, The Wombles and Pat. The screening I’m sure will also bring with it a host of new little people to wonder in Ivor’s creations.

The Bristol Festival of Puppetry runs from 26th August – 6th September with ‘Ivor Wood: An Animated Celebration’ being screened on Saturday 29th August at The Watershed at 1.30pm.

A great article here for you all from Toy Trader, March 1996 on the merchandising for Postman Pat. As previously mentioned advertising was, and still is, the main source of income for animated shows and it’s proved here in the huge numbers revealed in the opening paragraph.

Written to promote the second series of Postman Pat it shows just how successful and eagerly anticipated the series was. Ivor was known for not being 100% behind the commission of a second series but I’m pretty sure as he started the process his love for his old chums soon flooded back. Holding Miss Hubbard’s bike up in the photo below Ivor was joined by animator George Laban, pictured holding Pat. George had just finished working at Bumper Films and was in the process of sending his CV out when Ivor got in touch and asked him to work on Pat. George was quite young and remembers feeling pretty nervous when he started as he was the only animator for the entire second series. The first series animator Derek Mogford had already left Woodland Animations at his point and it was left to Ivor, George and production manager Ian Jones to produce the entire series from their studio in Fulham.

Whilst the production side was covered by Ivor and his team it was Ivor’s wife Josiane that would cover the merchandising output. She oversaw the merchandising for all Woodland Animations shows and proved that postmen really could be the shining stars. 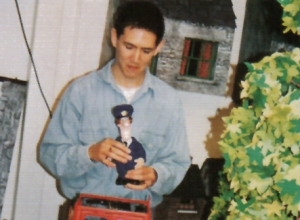 After discovering this nearly a year ago I thought it would be a great opportunity to share this with you all. First aired on the BBC on 16th March 2003, programme Timeshift tells the story of The Magic Roundabout right from the early days and includes interviews with historians and both Ivor and Josiane Wood. Ivor speaks candidly about the show and remembers it as an ‘influential starting block’ to what was to be an incredible career

For all those Ivor Wood fans there is a great section starting at approx. 39 minutes that serves as a retrospective of Ivor’s work post The Magic Roundabout. This visual delight is introduced by film historian Brian Sibley, as ‘being created with a far higher degree of artistry’ than that of it’s predecessor. Highly commendable and very just words for Ivor’s pioneering and truly inspiring animations.